This article will contain bits and pieces of the movie, if you haven’t seen the movie, you have been warned. Prepare to be spoiled. Haha.

This latest Marvel Cinematic Universe movie, in my opinion, raised the bar of excellence to a new level. This is something that I always expected from Marvel. Here are the reasons why.

Here are my thoughts on the movie, the Avengers: Infinity War.

Multiple character development is important in every story. It’s how we grow to love each “personality” in any story or movie. As time goes by, as we watch each movie in the MCU like Iron Man, The Hulk, Captain America, Thor, Doctor Strange and many others, we see connections or threads that ultimately create an intricate web of awesomeness and that also lets us visualize a “bigger picture” made up of most, if not all of the puzzle pieces and subplots we’ve seen along the way. The Avengers: Infinity War is the culmination of all the stories told in the past since Iron Man began in the year 2008.

Most of us have already felt a kinship and fondness for many of these characters long before the movies were made, especially comic book fans and readers. Through the years, we have formed our personal emotional investment. We grow attached to these personalities. When the heroes bleed and get hammered down, we feel it and in some cases, we also receive scars of our own. When they meet challenges, we cheer them on and we root for them. When they triumph and overcome obstacles, we feel inspired and relieved.

Sorry, I got off topic, back to the character development topic. In the first few minutes of the movies, we bear witness to how Thanos, the mad Titan, knocked out the Hulk in one round. Notice how the Hulk was never able to land a second blow? Each devastating punch that Thanos (named after an Egyptian God of Death, Thanatos) delivered was able to stun the “Strongest Avenger,” and in a few seconds, the Hulk was down. He was awestruck, utterly flabbergasted at how easily he was overpowered, outclassed and outmaneuvered. It was a no contest! He could have died and he could not believe it. Imagine the kind of destructive force that our favorite emerald giant felt with every blow? Oh yes, and fanboys and fangirls would be quick to complain that, hey, they nerfed the Hulk. What most of them failed to see is that for all the power that the Hulk contains within himself, Thanos is a cut above the rest, another level of his own. He is not just a world threat; he is a galaxy-wide threat, all by himself. With the infinity gems in his possession, he becomes a universe-spanning threat. In the Marvel Comics, Thanos with Infinity Gauntlet and all six of the Infinity Gems collected, he is supreme. He snapped his fingers and said, let it be done. Then in a moment, half the universe’s population was snuffed out, terminated, gone with the wind. Let that sink in for a while. 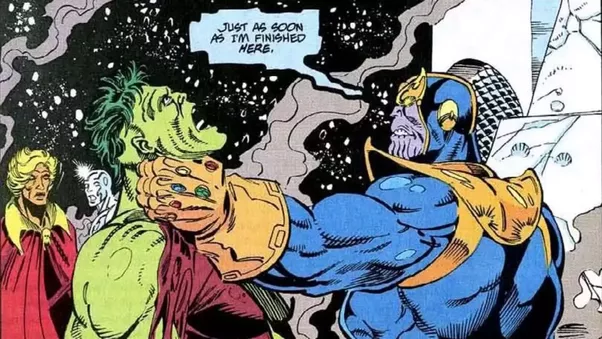 When the Hulk returned to Earth plummeting like a comet and crashed inside Dr. Strange’s Sanctum Sanctorum, he turned back to his human form and we see, Dr. Bruce Banner in a frightened state saying: He is coming! It was ominous and foreboding. Hulk seemed to be the “messenger of Doom or Death” at that moment. When I saw that scene, I had goosebumps. It was similar to one classic milestone in the Marvel Comics when the unstoppable Juggernaut was so frightened, wait he was completely terrified. Juggernaut arrived as a comet plummeting from afar too. He uttered a single word: Onslaught! 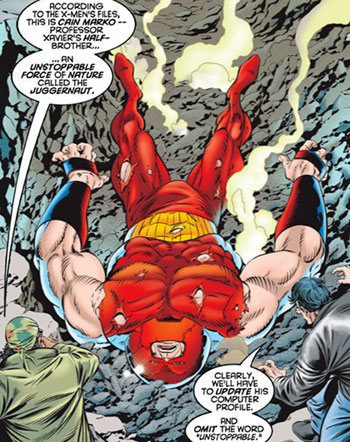 Uh oh, back to the movie shall we? As the movie progresses, we see Dr. Bruce Banner who tries to let the Hulk out. However, the Hulk refuses to come out. Can you imagine Hulk being afraid? What does that say about Thanos? The biggest bully, in the Marvel universe, the “strongest of them all” has just received a crushing defeat and felt morally threatened. I daresay, he suffered PTSD, post-traumatic stress disorder. I feel for him, I can almost understand his pain, and I believe this is merely another part of the Hulk’s story. Let us cheer him on and believe that he will overcome this. Relax people, this is all part of character development. What does not kill him will make him stronger and hopefully wiser. Wait till you see the “Worldbreaker Hulk” in the big screen, haha. In this movie, Thanos broke the hulk not just physically but also emotionally, psychologically and maybe even spiritually, so can we call him, “Hulkbreaker Thanos?” He did it with just a single “power gem” in his possession. What more can this death worshipper do in the MCU with all six infinity stones combined?

When the Hulk was being clobbered I was hoping that Hulk would say, I can do this all day!

Don’t worry Captain America has his moment in the movie too! He is one of my favorite Avengers. I am very happy with the movie and where it is going. There is so much to see and discover. I can’t wait for more. Are you ready for more?

This is taking longer than I expected. I am cutting this article short for now and I’ll call it Part 1. Stay tuned for Part 2. Thanks for visiting.

Have an awesome day!